Color psychology is that scientific field of study, which focuses on the influence of colors on human behavior and their contribution towards the physiological well-being of humans. A lot of us do not know that colors have a lot of influence on our daily lives and on our life choices. In the field of art, design and marketing, this study is extensively done to influence and attract customers towards buying marketed products and brands. If businesses understand Psychological Effects of Colour & Paint in Office Interior Design they can use this information to boost employee morale and productivity.

The Way We Understand Colours

In the medical field, colors are used as therapeutic agents to treat psychologically diseased patients. However, color psychology is difficult to quantify and thus it is hard to prove its effects on human beings in a measurable way. Color psychology is a very subjective matter and can vary from one individual to another depending on their response to a particular color. Color psychology also varies regionally depending on the perspective of regional society standards and rules. For example, while the color white is associated with happiness in the western parts of the world and is the color of choice in weddings, the eastern world associates the same color with grief, mourning and funeral-wear.

Thus, instead of going for definitive predictions, color psychology leans more towards universal reactions to colors. In general, colors can be differentiated into warm and cool categories. An example of a warm color is red and also includes other colors that fall at the end of the spectrum. Warm colors are known to be more stimulating for human beings as per color psychology than the cool ones like blue. Cool colors have more calming influence on people, as per research.

Again, bright and soft shade categories are segregated due to their behavioral influences. Softer alternatives of brighter shade-cards appear more soothing. For example, pink is just another softer shade in the red spectrum and is soothing while red is bright and stimulating. Similarly, sky blue and navy blue have different effects on human psychology.

From the above examples, it is clear that colors can be used as a tool to alter or channelize people`s behavior, every-day mood as well as performance. A lot of work places utilize this area of study and carefully make use of colors in their interior design to give their employees a psychological boost. The general principles of color psychology thus find use in work places to keep positive vibes as well as positive attitude at work. Since maximum amount of time of any working individual is spent in workplaces (enclosed spaces), the effect of interior color and lighting on them becomes more defined and prominent. That is why it is important to understand the Psychological Effects of Colour & Paint in Office Interior Design.

What Colour Makes You Focus More?

A study that is reported in the International Journal of Biosocial Research (Volume 3, No. 1), had a school-room wall color changed from orange and white to light and royal blue to see its effect on their pupils. Furthermore, the orange rug on the floor was replaced with a grey one. Also, full-spectrum lighting was introduced by replacing fluorescent lights and diffuser panels. The result of this study showed that school children responded to these changes with lower mean systolic blood pressure that had dropped from 120 to 100 (around 17 percent). Their behavioral aspects also showed significant changes like better behavior was noted and more attention was seen to be paid to their lecture classes. The children became less aggressive, which was reported by their teachers and independent observers as well. Later, when the study was halted and the colors were reversed to their original setting, the observations showed that the children once again got more agitated and unruly.

Several studies like this have time and again hinted about the influence of color psychology on human behavior, children and adults alike. Ever since, many offices have been experimenting color psychology by using interior design as a tool to increase productivity and have achieved increased employee efficiency thereafter. 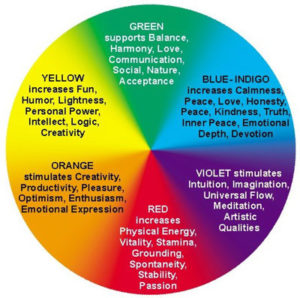